The two weeks I spent in the Northern Territory of Australia were a once-in-a-lifetime opportunity. So many of these moments were new and fascinating.  I was pretty excited to get out of chilly chilly Victoria and get outside into some warm winter weather. As soon as our small plane touched down at Galuwin’ku airport we felt the heat!

How could you not love this landscape?!

Three of us traveled to the remote Elcho island off the Northern coast of Aus for 2 weeks to be part of a council based Animal Management Program. There is a large amount of community dogs and cats that live in Galuwin’ku (the largest community on Elcho island). The majority of our work was spay and neuter surgeries and distribution of dewormer medication.

After we first landed we did a little tour of the community and drove past some of the main buildings.  After a few minutes we came across a group of people standing by a dog on the side of the road. He had been hit by a car and was not looking good. We asked if the people wanted us to ‘finish’ him (euthanasia).  In the evening we went to walk by the beach; you can’t go close to the water because it is full of crocodiles. The sunset was amazing. We heard a dog crying and found her laying in a stand of trees in the vines. She was old and riddled with ticks and mites. She belonged to a nearby family who I think moved the dog down to the beach because she had been sick and crying for days. I had never considered how difficult it might be for families to get rid of a dog or euthanize an animal who is sick if there are no vet services around.

No one on the island wakes up early; this means that we got to very casually wake up, eat breakfast, and leave the house around 9am… 9:30am…whenever. We often stopped in at the ‘clinic’ (a trailer) and picked up a few things we needed. Then we would drive slowly through the community and stop at family homes and ask them if there was any dogs or cats for ‘operation’ (the term for de-sexing surgery). We would sedate the dogs with their pre-medication drugs at their houses and allow them to get sleepy before loading them into the ute. Children would run and catch the cats for us to put into carriers. At the clinic there was two tables to do surgeries on; you either had to bend over or sit in a chair. One table required you to stack 2 chairs & a pillow on top of each other to be at the right height. There was a desk lamp for added light. We made a makeshift scavenger system for ourselves. The surgical instruments are kept in a saucepan and boiled on the stove each night. Gauze is baked in a canister in the oven. Instruments are scrubbed and sterilized in cold sterile between each surgery. We made swaged on needles as we needed them.  Anesthetic monitoring was done with an SPO2 monitor and our stethoscopes. Each wound was sprayed with Cetrigen purple spray after surgery and dogs received flea spray for a day of relief. All the spays are completed as flank spays: this is because they likely heal faster, if the wound breaks down there is less chance of evisceration, a lot of the patients are either pregnant or lactating and you do not want to disturb the mammary tissue, and its easier to recheck the surgery site from afar. A lot of the animals will remember you and not want to come near you afterwards. Us students got to do almost all of the surgeries by ourselves which was SUCH good experience, and really cool because I got a lot of practice doing the less common flank spays. 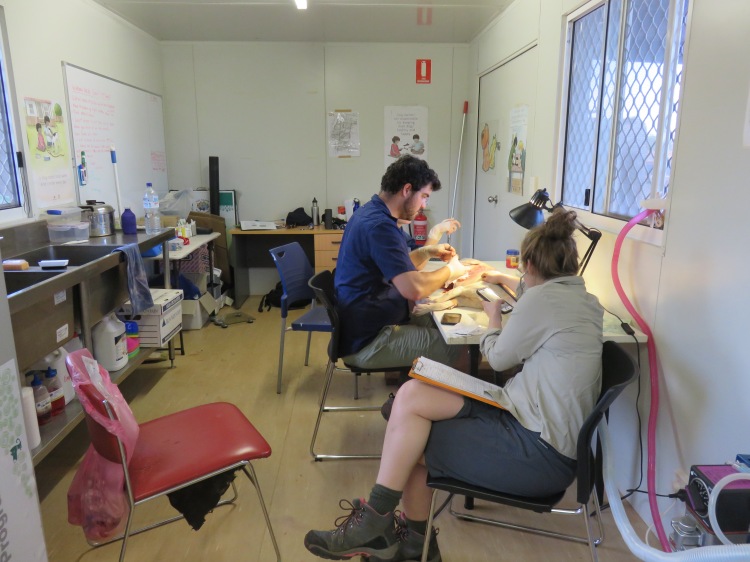 Occasionally we would do other vet work. We did a couple of new puppy & kitten exams, checked out a lump on a dog, stitched up a dog who had been gorged by a pig, and checked a cat with tail injury.  But, by far, the most thrilling call was—Nigel. Nigel’s family thought he had broken his leg and our whole team was very distressed as we rushed over to his house! Luckily….he must have just stepped on a prickle  and he was totally fine & just as cool as ever.

Nigel with his mum and his brand new collar!

In Aboriginal communities, especially in a climate like where we were, when someone passes away in the Wet (season) the body cannot be buried because of the humidity and the rain. The body is flown to Darwin where it is held in a morgue until the Dry (season) when it can be returned to the community for a funeral ceremony & burial. Dumbulah is an out station approximately 10 mins from where we were staying. We were invited to watch the funeral ceremony. Funerals can last for days to weeks; they happen for every person who passes away in the community—because of the associated health issues in aboriginal communities, funerals occur fairly often. As we walked closer to the community we could hear singing. When we arrived we saw a few hand painted cloth signs hanging up. The biggest sign was on white cloth, with bright green writing—’ Welcome Home’. Other signs said ‘rest in peace our loving father’, etc. The man’s name was painted.  There was 3 trees as flag poles for the territory flag, the Australian flag, and a third- they all flew at half mast. We sat on the dirt a little ways away and watched some of the singing and dancing. After a short time, a family invited us to come and sit on their mat with them. A lady on our mat explained to us that 2 different clans would sing/dance the next song (I think it was about a sunfish) one after each other. They had differently painted digeridoos.  This was such a valuable life experience for me; I sat there mesmerized for quite a long time.

We had a short meeting with some of the human medical team one morning to talk about a research project that is being run on the island. The medical team is swabbing mothers, children, and infants at certain households to look at skin infections (likely staph/strep). Our job was to take swabs from the dogs who lived at the house as well. The study required swabs from nose, mouth, and perineum.

Most nights we stopped at the beach on the way home to watch the sunset over the water. We would go for walks along the rocks close to the water or sit in a freshwater pool that was a safe distance from the ocean.

Jess and I woke up early a few mornings to go for a walk on the beach or the road above the ocean to look for crocs or dugongs before breakfast. It was really lovely. We never saw a dugong, but we did see a crocodile! 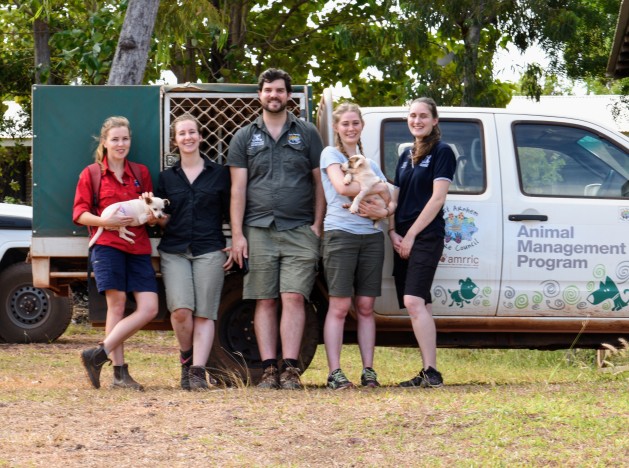 Our fantastic team, we got along swimmingly, and I think all of us grew a bigger spot in our hearts for Aboriginal culture and the NT.

First week of clinical placement done and dusted! The small animal clinic was a bit smaller and slower than the places I’ve worked in; but you can always learn no matter where you are. This pace of appointments was perfect for asking lots of questions. I took the time to try and have some interesting discussions with the vets including their rationale behind drug protocols, unusual points they’ve learned from specialists or conferences, and how to deal with colorful clients as a new grad.

The clinic had 2 senior vets and 1 new grad vet. I loved this because the new grad vet chatted to me about lots of practical advice on how to navigate (instead of struggle) through my first year in practice. Speaking to the senior vets was fantastic for further expertise on cases and discussion of more complicated surgeries and techniques. This was helpful because after discussing multiple techniques on how to repair ruptured cranial cruciate ligaments we saw a couple of patients with the disease —one dog with a suspected tear, and another dog for a post-op assessment.

One of my favorite parts of this placement was the opportunity to see a flank spay. We’ve been taught that they are generally an older surgery and it is more typical to do abdominal spays now. However, this particular patient was contraindicated for an abdominal incision. I also enjoyed one morning when I spent some time monitoring a critically ill patient who had been brought into the clinic with an acute onset of heart disease and pulmonary edema (fluid in her lungs).

We also performed an enema and an ear clean under general anesthetic and admitted a patient with a fractured pelvis. I enjoyed listening in on consults regarding a seizing patient and a patient with behavioral issues.

Once the vets learned that I knew how to put in intravenous catheters I was allowed to put them in on all the patients that needed one. Practicing my hands on skills was the best part of this week.

A huge thank you goes out to the vets and staff at Greenvale Animal Hospital who are now part of my journey to becoming a veterinarian! 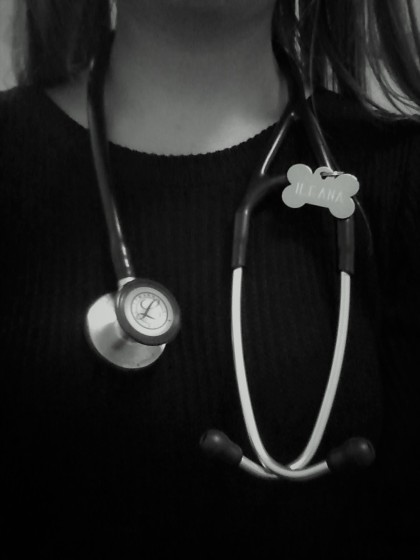 Dinosaur Provincial Park. August long weekend 2022
Nova Scotia. July 2022. 🫐🍷
Another week done 😊 Hope everyone has a great weekend!
My very first dog c-section was at 5am after about 2hrs of sleeping and working like crazy on call all weekend. It was just me and a technician. I was nervous & tired & wished I knew what I was doing. The dog did poorly under anesthetic and there was fluid pouring off the table soaking my shoes as I constantly threw puppies at my tech to recover! I was 100% sure everyone was going to die LOL. But everyone lived (even me 😂) and I saw all the puppies 8wks later for their vaccines 💓 So naturally I have dog c-section PTSD 🤣. Luckily, the clinic I work at now sees lots of c-sections and all the staff could do the surgery in their sleep. Thanks to the help of our student & a great mentor, I successfully delivered 14 healthy babies recently!