I’m on my way back to Australia right now; sitting in LAX (my least favorite airport) and killing 9 hours.

Yesterday I finished off a 2 week placement at Tri-Municipal and Meridian vet clinics. They are a mixed animal practice–with the majority being small animal work.

Throughout the week I followed doctors into dog and cat consults. Often I would just listen but sometimes I was involved in the discussion of the case. I  also did my own physical exams and administered vaccines and dewormer to the patient.

Early in the first week I got a chance to try my hand at a cat neuter.  This is a relatively ‘easy’ surgery in small animal medicine—you still have to go to school for a lot of years to get to do it though!  There is a few different techniques and I wanted to try them all.

I made sure to practice on this string with a knot in the end… I probably castrated it about 18 times. #poorstring

We diagnosed a textbook case of demodicosis.   This is a skin disease caused by a little mite that lives in the skin and can cause a dog to be itchy and lose patches of hair. You can find the mite by looking at a sample under the microscope. This was interesting for me because it is not an overly common disease. As well, quite often you can diagnose a patient with the disease without ever finding the little bug! This particular case presented an interesting opportunity for research to determine if this animal was safe to breed. There is a concern that this could be passed on to future puppies.

My favourite calls this week were the cattle calls. The first one turned out to be a bit of an emergency— we were called to a farm who had a cow with an episiotomy. Unfortunately the cow was bleeding out and the vet had to rush in and suture her up! I hear she is doing great!

We also went to a couple of small hobby farms to do some preg-checking. Yes, this is one of the times where vets stick their arm up cow butts to see what they can feel. It was nice to be on a small farm for these appointments because it allowed us to go a bit slower.  I palpated each cow after the vet and gave my own diagnosis of pregnant vs open (not pregnant).  You can diagnose this based on what the uterus feels like. I need more practice before I can really start being specific about weeks of gestation.

We went to a dairy and examined 4 sick cows. Two of them likely had pneumonia. This was interesting for me to see after my last placement where we did lots of post mortems on cows that had died of pneumonia. This week I got the chance to examine and observe clinical signs of pneumonia in live cows.

Abscess are pretty common in cows. And if you are one of those people that love ‘Dr. Pimple Popper’ then you will love cattle abscesses. So when we got a call about a ‘cow with a lump on it’ that is what we suspected. But, that was not quite the case….

Instead we were presented with a really weird tumor hanging off the cow. It had appeared to have burst open then sealed and re-grown. We determined that it would be best to sedate the heifer for the removal procedure. We attempted IV sedation via the tail vein. Either we under-dosed or the heifer was just not having it—she got a bit loopy and angry but never sleepy enough for us to cast her. She paced at the end of her rope on the non-ideal side of the squeeze.  A bit of a rodeo ensued but eventually she was safely inside the squeeze again, and we infused the stalk of the tumor with a local anesthetic before removing it. The sun was going down and it felt like a bit of a race against time. When we finally had the tumor off I cut it open to see what it looked like inside (classic vet student… because this thing was gross!!). 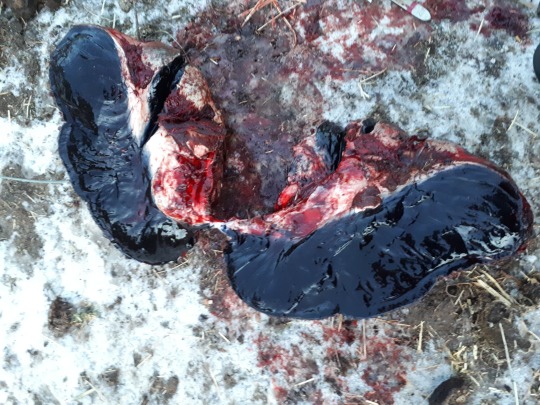 It was swollen and dark red inside. When you pressed on it a black liquid came off in my hand

The inside was really weird looking and my best guess is a hemangioma? Any other vet field friends have guesses as to what it could be?

I had been crossing my fingers and saying little prayers that we would get a calving call on one of my placements. It is a bit too early for lots of calving in Canada right now.  But we got a call for a c-section! Surgery was preformed in a fantastic and heated (yay) barn! with warm water and facilities—like a table! Everything went great and we had a live (large) calf at the end of it! We did a 2 layer closure on the uterus and a 3 muscle layer closure, then sub-cutaneous tissue, then skin. I definitely got my practice in with cattle sutures!

We had a few other interesting cases this week. One of them was a dog who could not pee. He is an adult dog but we suspect that he was born with an abnormality that prevents him from urinating. We took x-rays and he had a huge bladder! I catheterized it and drained a lot of urine for him! You could tell that he started feeling better by the minute. We hadn’t got to the bottom of the problem by the time my placement was over.

I also observed tail docking of some rottweiler puppies. This is quite the ethical/moral debate in the veterinary world.

Another interesting house call was to do puppy exams on German Shepherds (one of my favourite breeds!) at a breeder’s facility. This was a particularily cute….and wiggly exam day.

One morning we arrived to a severely sick scouring calf. We monitored vitals (heart rate, breathing rate, and temperature) and ran in warm IV fluids for a short while before heading off on a farm call. There was an older bull calf castration on the schedule that I wanted to watch.  The bull calf was a bilateral cryptorchid (inguinal crypts).  This means that his testicles were not fully descended and castrating him was not going to be as easy as we wanted it to be.  After putting in an epidural we got the job done on not 1, but 2 bull calves.

By the end of the second week I was lucky enough to have done a few feline spays, a couple of canine castrations, and a bunch of cat neuters on my own. I feel much more confident doing these surgeries by myself. I have yet to determine my own specific favorite method though—hopefully that will come during my de-sexing rotation in a few weeks time. 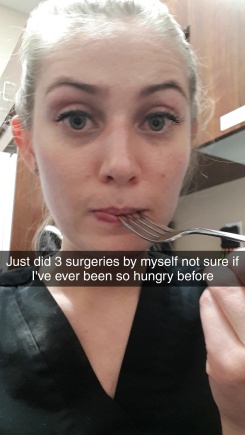 So much focus and brain energy used. I also need to focus on not tensing up my shoulders during surgery.

After the last day of placement I said goodbye, and drove home in a beautiful snowfall to finish off my packing. Some of my friends stopped in to say goodbye which was lovely as well.

Thanks again to all the staff at Tri-Municipal and Meridian Vet Clinics! I had a great time!

My very first dog c-section was at 5am after about 2hrs of sleeping and working like crazy on call all weekend. It was just me and a technician. I was nervous & tired & wished I knew what I was doing. The dog did poorly under anesthetic and there was fluid pouring off the table soaking my shoes as I constantly threw puppies at my tech to recover! I was 100% sure everyone was going to die LOL. But everyone lived (even me 😂) and I saw all the puppies 8wks later for their vaccines 💓 So naturally I have dog c-section PTSD 🤣. Luckily, the clinic I work at now sees lots of c-sections and all the staff could do the surgery in their sleep. Thanks to the help of our student & a great mentor, I successfully delivered 14 healthy babies recently!
Ouch! X-rays can sometimes be hard to read---I will have to search for small hairline breaks or things out of place. Not this x-ray. This poor girl had an obviously broken leg. I love getting an easy answer on x-ray! Don't worry, I fixed her up 🙂 Can you guess the species?
Its calving season baby! One of my favourite times of year! Man its busy, but look at his cute little face 🐮
I love baby kids & lambs so much I'll go hang out with them on my time off too. Just let me squish you 😍