No, not a push up bra. Just a really common saying as we get cows lined up in a race before their examinations. “Push-up girls!” We want them to push up into a nice tight, straight line so both the cows and us will be safe.

Jess and I flew down to Tasmania for 2 weeks to complete our Dairy Rotation. Obviously, the days were filled with cows… and cow poop! But we kept the weekends open and ready for lots of exploring.

Something new that I did in Tasmania was induce cows to calve. This is not commonly done in the rest of Australia. Farmers in Tassie use induction to help maintain tight calving intervals of their herd (having all their cows calve at the same time) so that it matches up nicely with the pasture growth (so there is food for the hungry momma cow’s to eat!). It is a simple procedure–just an injection! But the methodology and the conversations behind it were what I found most interesting.

Another new thing I did on this rotation was something called “visvaging”.  Yes, as in “visualizing the vagina”. This is done with a speculum and a light. Every cow in the milking herd needs to be examined in order to identify the presence of infection coming from the uterus. The sick cows need to be treated so that they can heal and become pregnant again. This is an older technique, as many veterinarians use a ‘Metricheck’ now. The older technique is still preferred on some farms and I think it is important to know how to do it.

The only cow I was allowed to take pictures of on this rotation. Also, who wants to see pictures of visvaging anyways?!

Although this was our dairy rotation we spent some time semen testing bulls; which is more common in beef bulls. Semen testing is done to make sure that a bull is healthy and fertile before the breeding season. It is important that they can do their job (which is getting cows pregnant!). One afternoon, Jess and I both drove out to one of the vet’s house to semen test his bulls. Firstly, he had an absolutely fantastic property on top of a hill with almost 360 degree ocean views! Secondly, I found it hilarious that I tested one bull and came out relatively unscathed (ie: clean) and Jessica tested the next bull and came out absolutely covered in “dirt”…. don’t ask me how she did that!

I went to a lot of preg-checking calls. For many of them, the farm set up was not conducive to having a student manually palpate cows after the vet so I ended up watching the ultrasound screen a lot. This was okay because it gave me a decent amount of practice ageing pregnancies based on their size. At one of the first preg-checking calls (at a dairy) the vet told me she’d let me guess the breed when we arrived. Thinking that I had a decent handle on dairy breeds (there is not a lot of common ones), I thought this wouldn’t be that bad…. when we drove up I saw a bunch of red cows (some with blue eyes!) staring back at me. I responded with “not dairy cows”. Fun fact! Apparently Australia has their own breed called: Aussie Reds. For the super hardcore; here is the breed website. For everyone else, here’s a great picture! 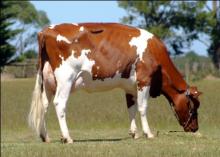 Please enjoy this Google image of an Aussie red cow.

Another one of my favourite calls was to a Wagyu beef farm. They were one of the only farms in the area doing embryo transfer. The recipient cows were black Angus which were these huge beautiful CRAZY cows that were such a pain to get through the race and into the crush. Looking to the paddock beside us were all the relatively small wimpy (comparatively) looking Wagyu animals that are just so expensive and produce the most amazing steak! As well, this farm is located close by to an island and they do a yearly run of their cattle across at low tide. We went in for a cuppa after the job was done and had a nice chat and watched some amazing drone footage of the crossing!

Some of my favorite calls are for calvings. This whole year I have been hoping to get more experience with them. Luckily I got to go to 3 calving calls on this rotation. The first was a cow that had gone down (like literally laid down and couldn’t stand back up) because she was exhausted from trying to calve.  We met the farmer at their house and hopped on a “bike” (actually a quad…) and drove up and down some whopping hills and  through a creek before we found the cow at the bottom of a steep embankment. She had gone down in some thick mud beside a stream. Besides getting my boots stuck in the mud and flailing around wildly to try and stay on my feet, I managed to get the calving chains on the calf’s already exposed feet & pull him free! The benefit of being right beside the stream was being able to walk 2 feet and stand in the fresh water and wash all of our gear (and our arms!).

The second cow was WILD. By that, I mean a beef cow that was NOT happy to see us. Luckily she was already in the crush when we arrived, but that did not stop her from trying to kill us as we walked by. I’m not going to lie, I was pretty proud of myself for getting her epidural in (on the first try!) and not getting kicked! What ensued was an amazing rodeo of calf manipulation, attachment of calving chains, having the cow go down in the crush (and then up again…. x3), putting on a halter and then letting her out of the crush to go down. Folks, this is when the real fun started; we had the halter wrapped around a metal pole and being held by the farmer. In about 2 mins I would be silently praying that this was the strongest rope halter created by mankind… The vet snuck up and got the calving jack into position. For those of you who do not know what a calving jack is, here is a picture: 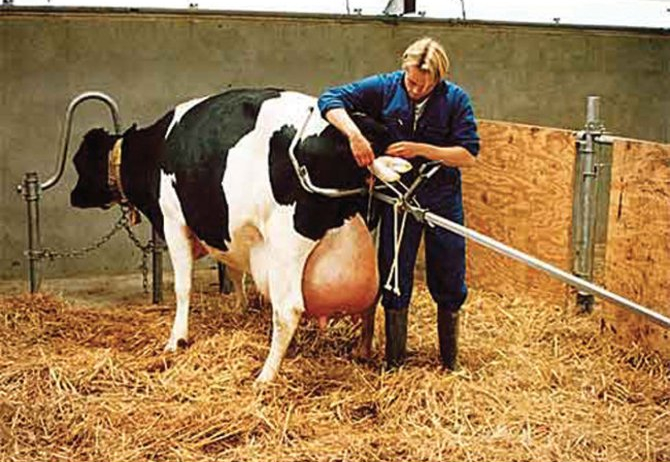 The calving jack is the metal piece of equipment. It is placed under the cow’s tail. Chains are safely wrapped around the calf’s feet & attached to the handle on the long pole. You can then pump the handle up the pole which will pull the calf out of the birthing canal. https://www.pbsanimalhealth.com/products/vink-calf-puller

At this point the cow decided to get up again and start swinging back and forth at the end of her rope. Which meant we had an angry cow with a 10ft metal weapon swinging around in front of us. I attempted not to get knocked out cold while marveling at the determination and calm mindset of the vet who continued to dodge the jack, replace the chains, and eventually pull the calf out!

The third calving call was a lovely calm cow who’s calf was breech. This was fun for me because the vet let me do a lot of the call. He helped move one of the calf’s legs into position and I moved the second leg into position, I need a few hints and tips on where to pull and in what direction. Side note: apparently some vets think its cheating if you can fit both your arm’s inside the birth canal to manipulate the calf 😛 (sorry non-vet people for that mental image!) Then we attached the calving jack and I pulled the calf out!

Okay, okay, enough cow stories! On our weekends we tried to squeeze in as much exploring as we could. Neither Jess or I had been to Tassie before and we doubted we would be back again. On our first weekend we drove down to Cradle Mountain and did a few awesome walks around there. This drive was when we realized how beautiful Tassie really is! The wattle trees were in bloom–brilliant yellow everywhere! 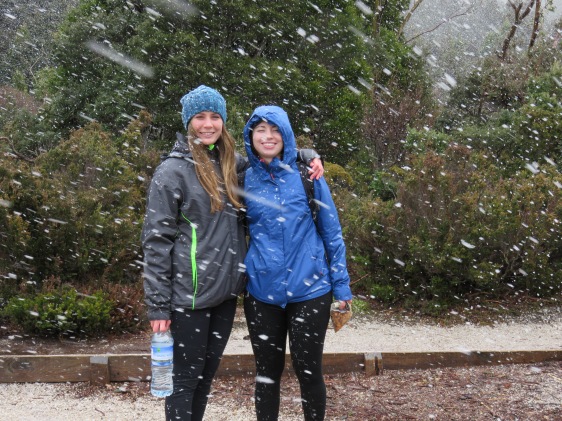 We had everything from horizontal rain, snow, and sun during our few hours of hiking in the Cradle Valley! One minute we would have great visibility, and the next we could barely see a few meters ahead. 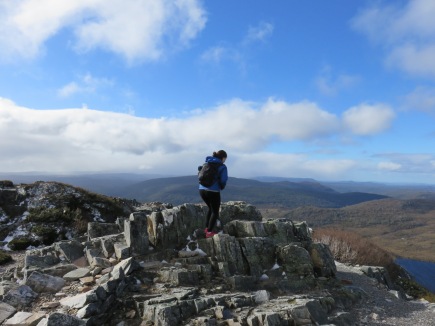 Jess, just reaching the top of Marion’s Lookout in Cradle Valley. Luckily the snow had cleared!

The next weekend we had big plans! We drove from Smithon down to Hobart, over to Wineglass Bay, Launceston, and then back to Smithon! The best part was probably the hike we did at Wineglass Bay. It involved a short hike up to the lookout and then about 1000 steps down onto the beach—which was gorgeous! And when ocean is that beautiful, how can you resist jumping in it?! 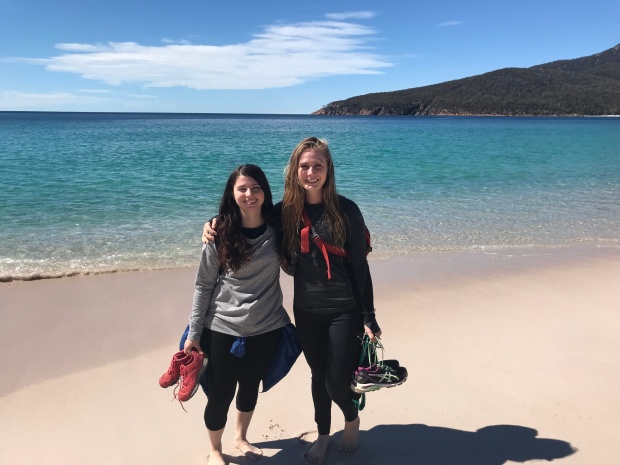 It was as beautiful as it looks 🙂

So the classic Canadian in me… I changed in the bushes and then ran straight into that water. It was….fresh! Even with all my experience swimming in glacial lakes growing up, I still got the wind knocked out of me when I hit the water. haha! 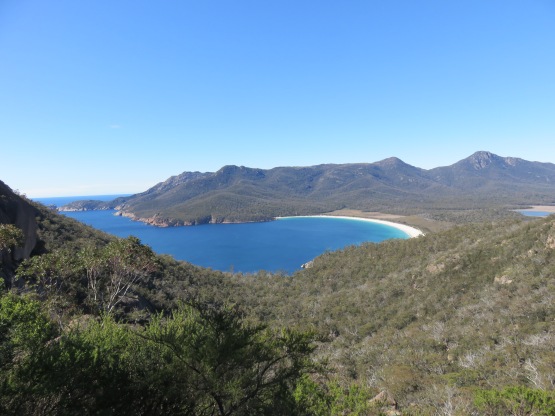 The view from the top of Wineglass Bay 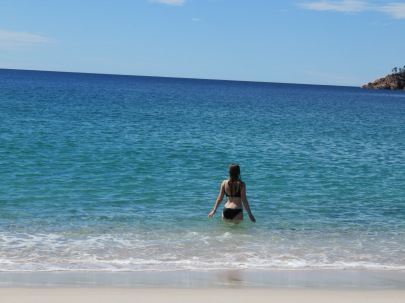 Proof that I actually did go in the water. This is me probably struggling to breathe.

We stopped a bunch of times along the way and ate some nice food, did a few short walks, and had a lot of fun urging our tiny rental car up and over the hills!

It was a short flight back to Melbourne and a day of rest before starting our second week of General Practice rotation at the University Hospital.